You may have heard about a project that Google has just announced called AMP (Accelerated Mobile Pages), which aims to speed up the mobile web.

Publishers around the world use the mobile web to reach these readers, but the experience can often leave a lot to be desired. Every time a webpage takes too long to load, they lose a reader—and the opportunity to earn revenue through advertising or subscriptions. That's because advertisers on these websites have a hard time getting consumers to pay attention to their ads when the pages load so slowly that people abandon them entirely.

I completely understand the need for this project - the web is slow and advertising is such a key revenue source for publishers that these adverts are ruining the experience. Facebook's Instant project is designed to do much the same thing. AMP is not a new idea.

Technically, AMP builds on open standards and allows you to simply replace some parts of your build and some components of your system with AMP versions of those pages. What happens with these pages is the secret sauce - Google knows of these pages, and if they pass the AMP tests it caches versions of those sites on its own servers.

This isn't too scary - Google has committed to allow  the major advertising networks and pixel tracking so that businesses can maintain their precious statistics. AMP, in general, is a good idea.

Except for one thing.

If you're not on it, you're screwed.

Have a look at these two search pages. Both are searches for "Obama" on a Nexus 5 (emulated). The one on the right is the current search page, the one on the left is with AMP articles. 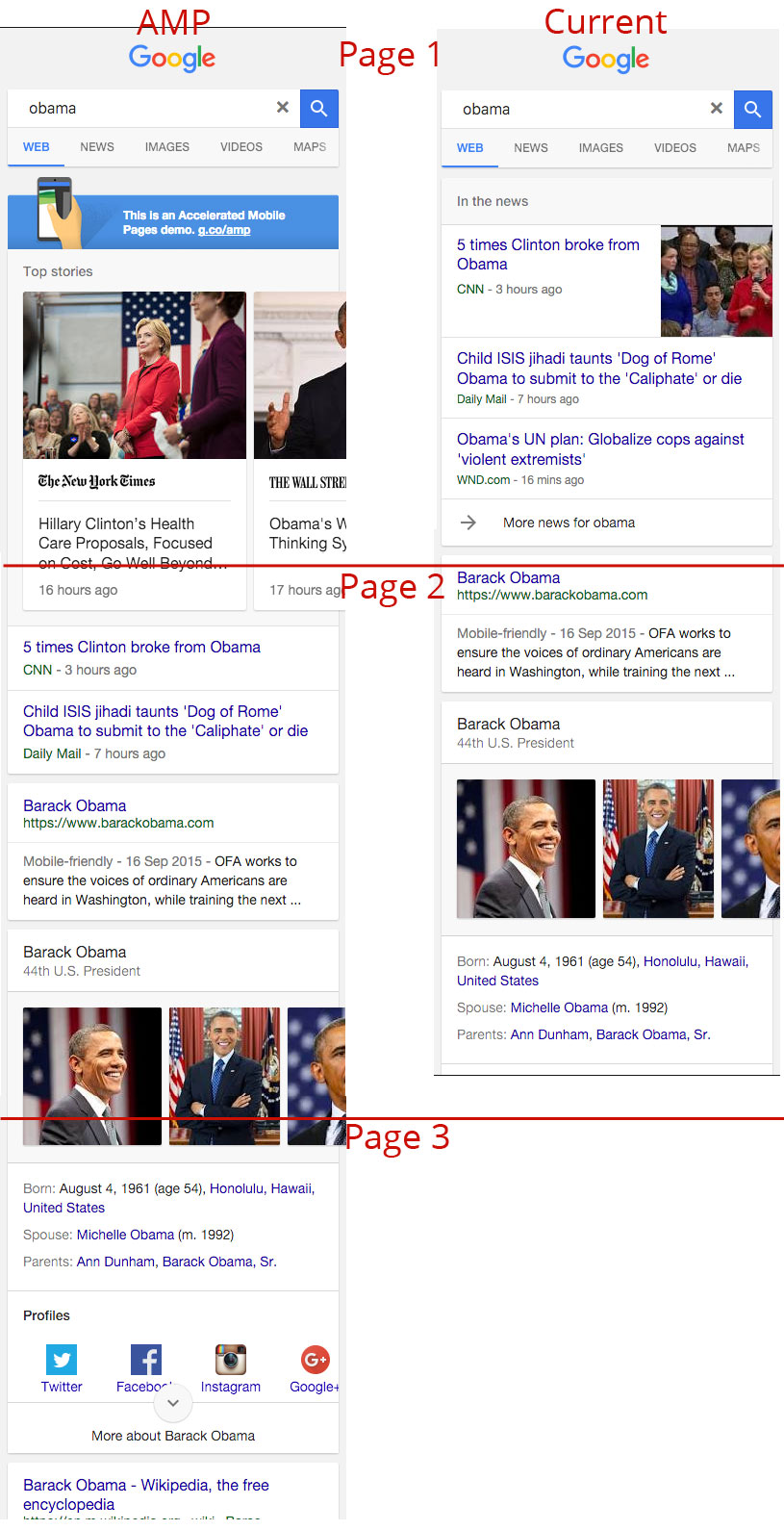 Notice where the first organic listing is in each page. Currently, it's just below the first page, but with AMP, it's over two screens of content away! That's absolutely massive, and for anyone not in the top 3 results, they may as well not be there.

Basically, if you're not an AMP publisher, expect your traffic to drop, by double-digit percentages.

Short-term, AMP will make publishers sit up and take notice of web performance, it'll make websites faster across the board, and make more customers use Google. For users, this is a win/win situation.

I've come to the conclusion that this project is harmful to the web in the long term. If a publisher isn't getting traffic because it's all going to AMP publishers, then the amount of content on Google drops, quality drops and is put into these large content producers. You end up with less diversity in the web, because small producers can't make money without using AMP. Even in the end when you've only got a few publishers who can survive, they will be encouraged to reduce adverts, or be limited to the subset that Google's DoubleClick deem performant enough to be included in the AMP-friendly set of advertisers. This may block the big-money adverts, which keep these sites going.

It also creates dependencies on Google, and whilst it's unlikely to go down any time soon, being cached on their servers and allowing for only the most basic tracking mechanism, and only for browsers that Google supports. It creates a two-tier system that the web is firmly against.

This project seems to polyfill a developer/organisation's lack of time to dedicate to performance. Many very clever people are working on this education problem (hello to Path to Perf, Designing for Performance and PageSpeed) though it will take time. Short-term fixes like AMP and Facebook Instant are encouraging developers to take shortcuts to performance, handing their problems off to Google. This does nothing for the underlying issues, but with Google giving AMP such prominence in its search results, how can publishers resist?

Or is it a temporary solution

I hope that from all of this, developers sit up and take notice of web performance; improve their sites and provide a better experience for all. If we don't, Google will keep solutions like this around, leaving the only content that gets interaction as the content that Google approves of - and no one wants that.