I've been really interested in wearables since I saw the first press shots of the Moto 360. When wearables first appeared (the Pebble, Galaxy Gear) they were the equivalent of a calculator watch - quite useful for adding things together, but awful at telling the time and even worse for your sex life. They were blocky, had incredibly poor battery life and not something you'd even consider wearing on a night out. The Moto 360 made me take notice - a well-designed and, importantly, watch-like appearance gives it the credibility that it deserves. So, when I got the chance to try one for a weekend, I couldn't pass it up. 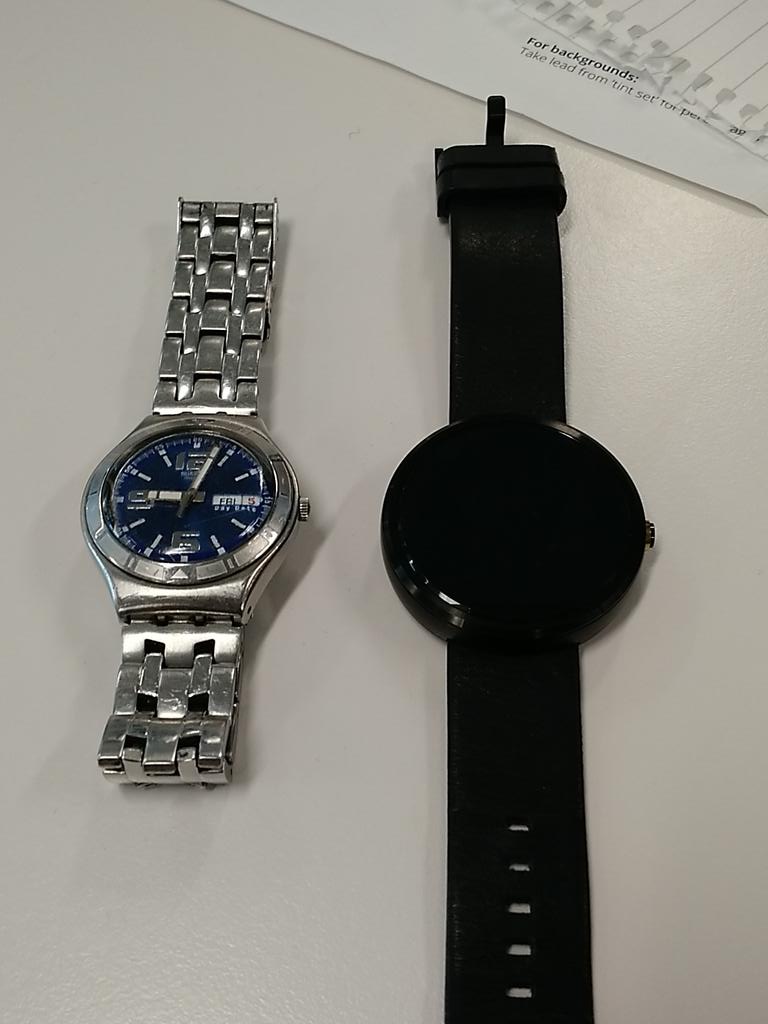 My regular watch and the Moto 360

The Moto 360 was a lot different to my regular watch. All dressed in black with a thin leather strap, it's a far cry from my tiny, battered metal Swatch timepiece. At first I was pleasantly surprised by its feel - very comfortable to wear and lightweight, I hardly noticed it was there. It's certainly a lot larger than my normal watch but I quickly got used to the differences, and got on with my day.

Initial setup was ok, it took two goes to connect over Bluetooth, but it was mostly painless. Then the notifications started raining in - Google Now bombarding me with reminders, weather updates, emails, Twitter, Facebook Messenger and more. At first it was overwhelming, and I wasn't used to the swipe-to-dismiss, or scroll on to ignore motions. With a bit too much going on the watch also regularly janked and slowed down, not reacting to my input, which was far more frustrating.

As a watch, it's really pretty poor

I spent most of the Friday in the office working at my computer. I'd be getting notifications on my phone and on the watch and on my laptop - it was all a bit much. I'd also put my normal watch back in my bag, so telling the time got quite hard. As a watch, it's really pretty poor. Telling the time it the one thing that watches are supposed to be good at and every time I turned to look at my wrist I'd see a black screen, then about a second later, finally, I'd see the time. Frankly, that's unacceptable and is one of the real issues that I struggled with during the first day.

I also played quite a lot of music on that day, and controlling that with the watch sounded like a good idea. In practice, I pressed the pause button on my headphones - much faster and far more convenient. It's another example of a problem that the watch solves that has already been solved in better ways.

In the evening I had a play and found a whole host of useful settings that made the rest of the weekend far more pleasant:

During the party the watch went pretty-much unnoticed... It was just a normal watch that people paid no attention to.

This was a big day in the Workman household, we were throwing a party and I was on BBQ duty. We were running around getting things ready, so without time to check our phones regularly, it was nice to have messages popping up on my wrist. Trying to send a message back to someone with my voice was a case of hit-and-miss, so after a few tries I gave up and returned to my phone. It was just a bit too noisy for my watch and it couldn't understand me properly - at this point the "Open on phone" action came in handy and the watch fell back to being a secondary screen.

I played with a few apps today, and some worked, most didn't:

During the party the watch went pretty-much unnoticed. It was nice to see who was at the door by who was calling me (and the dog announcing their arrival), but it was only in the small hours of the morning that someone said "is that one of those smart-watches". To me, the watch passed a very big test that day - acceptance. It was just a normal watch that people paid no attention to. A piece of technology that is so obvious on your body but that doesn't garner a reaction is what I wanted. It's not a big thing, it's just a watch.

The watch's battery lasted the whole party, which is more than can be said for my phone (Moto X 2nd gen). It passes that test for me.

That ability for it to blend into the background is something that I didn't really appreciate before, but really welcome.

The morning after, a little worse for wear, the watch was starting to feel more natural. I didn't get many notifications, and I felt a lot more relaxed with it. I started weighing up whether I would buy one or not.

I came into this experiment wanting this very watch, and I come out the other side thinking that I still want one, but not that one, and probably not the next one either. The problem isn't so much the watch - it could be prettier, smaller, more like a watch, but it's the software. It's still unintuitive and the apps on there aren't really apps. It's a glorified notification reader, with a few really nice features. It's really bad at telling the time, but that's not its primary function. I almost feel that I need a watch and then need an Android watch. Third party apps really jank the watch and are so hard to find that it took me a few hours to really start exploring the watch's capabilities. Android Wear needs more testing - the watches need more CPU/memory power, and developers need to test it out in the real world more. It has to come up with a better solution for "being a watch" which was just unacceptable.

I handed the watch back this morning and now have my watch back on my wrist. It's heavier than I remember, but I can look down and know what the time is instantly. It serves its purpose.