It's Mobile World Congress 2011 this week, and amongst the throngs of Honeycomb tablets, Nokia and Microsoft square dancing on the showroom floor, there are a few announcements that may not be hugely exciting to the general public, but that the tech community should be giggling with glee about.

I'm talking about this: 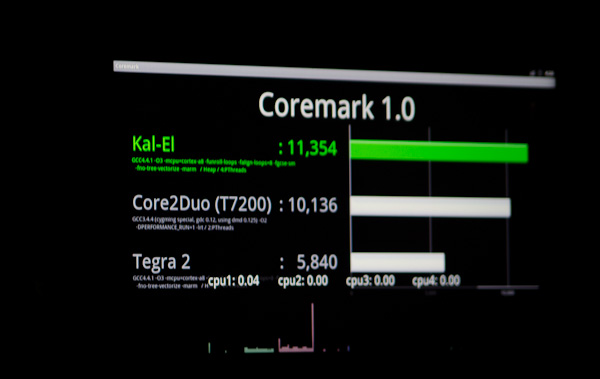 This is Nvidia announcing the Kal-El SoC (System on Chip), a 12-core Tegra 2 GPU mixed with a quad-core ARM Cortex A9 CPU, all on one chip. Even better yet, this chip will be seen in tablet computers in 6 months time. That's an incredibly aggressive timeline considering the brand new Tegra 2 chip is only 9 days old, and yet it's performance has already been doubled.

The even bigger news that has slipped by, is that that's not all. 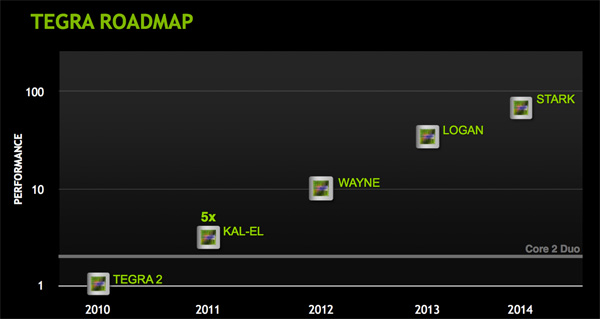 Notice the scale on the left hand side. Whilst the new chips are rising in a linear fashion, that's a logarithmic scale, so every year, these chips will double in power. By 2014, we should have SoCs in mobile computers that are 4 times as fast as a Core i7 CPU and 25 times faster than a Core2 Duo. That's an amazing amount of computational power in a chip the size of a peanut with a TDP of ~1W.

Modern UIs need this power So what are we going to do with all this power? Whilst it'll be like having an XBox 360 in your pocket, games aren't the only thing that will use this power.

Just take a look at Microsoft's Beauty of the Web demo site, showing off IE9's hardware acceleration enabling it to make blizzards with HTML5 web technologies. That's just the start of what we'll be able to do with this power. Think how useful Honeycomb's 3D Google maps will be, and think how it can be used to empower a mobile workforce, being able to take your entire desktop with you and have it work like your desktop pc. It will enable the mobile user to process huge data sets which previously would have been a server job, letting the workforce make complex decisions quickly and on the move.

Of course, don't expect things to change overnight. The first things to happen will be "true" multi-tasking, then a proliferation of HD video including Skype. It's taken years for web developers to embrace CSS3 functions, it'll take another few years to truly embrace canvas, SVG and WebGL.

The future vision is coming At CES 2009, Microsoft showed off a video for their Office of 2019 concept (below). The hardware announced today will drive this forward and enable developers to make these UIs of the future. I can't wait to be part of this future