Last night, I was lucky enough to meet Joe Stump, former Lead Architect at Digg and founder of SimpleGeo, who sat down with 7 developers near Old Street and showed us his latest creation: Sprintly. Here's my notes from the talk.

Sprintly was born out of frustration in how products are made. Joe is a business major, not CompSci like many Silicon Valley successes. The guiding principle behind Sprintly is that product is greater than the process.

No time like the present The first major difference to most agile tracking tools is that there's no concept of time in Sprintly. In SCRUM, we use points, but that's still tied back to a notion of time (where it should be effort+complexity+doubt), so it's still a developer lying to themselves. Sprintly works with the notion of features, and those features will ship when they're done.

Sprintly has Stories, Tasks, Tests and Bugs. Stories are your general user stories, Tasks are any other tasks, Tests are for developers to write tests for their code and Bugs are bugs! Any of these can be tagged with anything. A lot of teams tag with "a release" (1.0, Cupcake, whatever) which is fine, but the release will happen when stories are done or when the team decides to release something. Sprintly isn't there to enforce the process, just help you along the way. 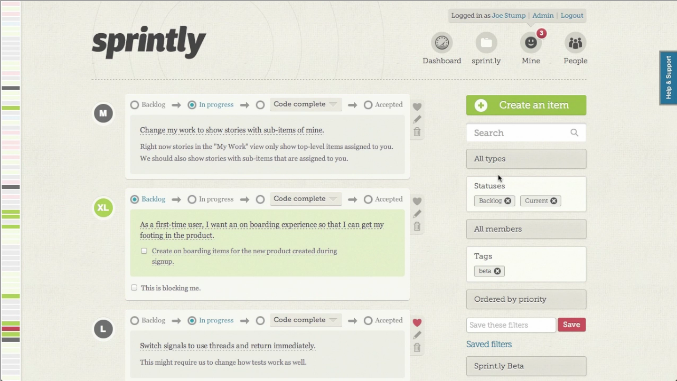 The holy grail for "older" clients: e-mail integration Everyone is allowed to be part of the process in adding stories to the backlog, favouriting a story or just looking around. There's e-mail integration whereby emailing a specific Sprint.ly address and cc'ing a developer will create a task assigned to that developer with the content and attachments of that email. The developer can then respond via email and that will be added to the conversation. It's awesome. I can see my clients getting involved with the agile process through this even though they may not be aware of it, helping manage the admin overhead of ticketing through e-mails. Long-term there will be ZenDesk support and potentially others depending upon "how much their API make me want to kill myself".

Tasks can be sorted easily with the quick-sort bar which shows in-progress and backlog items. These are integrated with GitHub, but it can work with any SCM that has a post-commit hook (SVN,Perforce etc), and even those SCMs behind a firewall. Any open bugs can be modified with your commit messages, even closing or marking multiple tickets as fixed.

Dashboards for those up top There's a dashboard with standard drag & drop Kanban board on it. It's a bit bare at the moment but this will be much improved in the future, including tools that allow managers to estimate better and identify overloaded developers. There'll be a read/write API coming in January so developers will be able to do our own dashboards for stakeholders etc if we don't want them to have access. Eventually Sprintly will give you daily digest emails and better integration with email when tasks are closed/broken.

In comparison to others, it's got its own niche: "Jira is like bringing a thermonuclear warhead to a knife fight", you only use 1% of it at most. Trello is similar but isn't just for software developers, it could be used for anything so won't be as useful in the long term.

Sprintly is currently getting loads of great feedback from users with around 35% retention rate for daily task usage creation, which is excellent for such a new product. You just have to search Twitter for Sprintly love to see how well they're doing.

Making money right now, and opening beta in 2012 Joe talked about how important he thought it was to be making money straight away, rather than having profit as "an afterthought". So, from January 1st 2012, Sprintly will be $9/month/seat (which is cheap compared to competitors) and it will enter open beta shortly after that.

I'm really looking forward to using Sprintly in anger at the start of next year. If you want to be part of it, get yourself on the waiting list. Thanks again to Joe for talking to us and I can't wait to start playing.