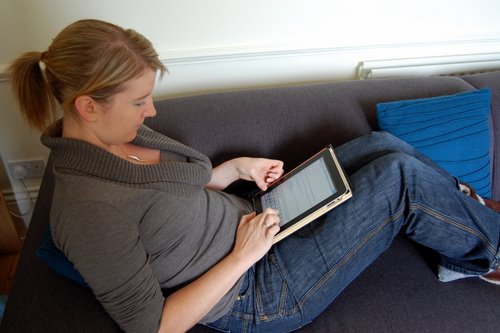 Aaargh! I hate this stupid thing! Why won't it do what I ask it to do!

I heard this cry coming from the living room one evening. My fiancée, Emily, was trying to use my beloved iPad to write an e-mail. "What's it done this time?", I politely inquire in response. "Everything!" came the reply, "All I want to do is send an e-mail, how hard can it be!"

Always wanting to help (like the loving husband-to-be I am) I show her how to copy and paste, move the cursor and find the comma key on e-mail layout keyboards, but then it struck me, why is this so hard? So, I asked her to sit down with me and tell me all of the problems that a real person(tm) has with Apple's latest gadget.

"Firstly, before I met you, I hadn't ever used a Mac. I had heard they were just for designers and arty-farty people, but they're just normal computers for every-day use. This is not about not understanding Macs, this is about the iPad. Also, I love the long battery life, and I really like the screen, it's brilliant."

"I'm a Hotmail user, and I can't get more than 50 messages when I'm using the Mail app. Your GMail account works fine, searches on the server and everything, but Hotmail is a second-class citizen and doesn't get all the features it should. It also doesn't sync read/unread items back to the web interface (which I use most of the time) so I don't know what I've read and what I haven't."

"There's no iPad app for Facebook. The iPhone version on the iPad looks rubbish, as do all iPhone-specific apps. The visual quality is really poor and not what I've come to expect from the iPad."

"I'm left-handed, and sometimes the iPad doesn't pick up the gestures that I make. Tapping on an icon sometimes sends me to the search screen! The whole interface seems to have been made for right-handed people."

"Moving the cursor around when entering text is painfully slow and really inaccurate. When I'm moving it the magnifying glass is right under my finger so that doesn't help at all! When my wrist touches the screen the whole screen moves and suddenly jumps to the bottom which is infuriating."

"It's heavy. For a girl, it'd be nice to have it in a handbag, but the iPad is too large and heavy for that. It wouldn't fit in 80% of my handbags and any it would fit in would also take a 13" laptop, which would be far more useful."

"I've not played many games on any platform so I can't compare the iPad to anything else like that. Still, the games I play on it are fun, if a little pointless."

"Getting stuff on to it is hard. iTunes is an issue and if you don't use Google/MobileMe, something like Dropbox or have your work e-mail on it, it's even harder to put stuff on it. It needs a USB port to load documents on. The camera connection kit is good, but it's pretty slow."

"There's no Flash support for it, and to me that's critical. For example, checking the weather on the BBC, I can get the basic information but the radar weather map doesn't work. Sites that have their own video player, like Wedding TV1 don't work, and for me, that seriously hampers its usefulness"

"I want web sites to work the same on the iPad as they do on the PC. These 'Mobile-optimised' sites are suitable for the iPhone, but not for the iPad and they shouldn't come up (N.B. this is referring to the Hotmail mobile web interface). I don't want to have to learn another interface. If I wanted just e-mail, I'll use the Mail app, but since I want the web site in the browser, show me the actual web site!"

"It's just not an improvement on a laptop for the situations where I'd use it. If I wanted something that size I'd take a laptop instead as it's has a DVD drive, all my music and all my web sites."

"All that said, it's a brilliant device that has its purposes and has generally replaced the laptop for general Internet browsing, but for what I want something that kind of size to do, it just doesn't do it."

These aren't the typical usability problems that his lordship Neilsen came up with, they represent problems of someone who uses Macs, works with a computer every day, and still has issues getting things done on the iPad. To be honest, some days I do too (discovering that yet another web site uses Flash is a classic).

What gets me is that many of these can be resolved by Apple and their close partners: making Hotmail work better with Mail, doing more testing with left-handed users, Facebook releasing an iPad app, Hotmail turning off the mobile site for the iPad, making the iPad render pixel-doubled iPhone apps properly (I refuse to believe that text can't be made smooth), and finally making iTunes work better for file management (or enabling people to use explorer/finder).

The moral of the story is whilst you can't please everyone with your designs, don't think solely about your target audience. Try to think about the people around them who will use the device and make sure it works for them too. If you're after a more practical use for this story, learn that the iPad isn't perfect, in fact, it's far from it. I still believe it's the best that's out there, and I'd love Emily to get her hands on a Galaxy Tablet to compare the two. We'll have to wait to see what 2011 and Android 3.0 and the BlackBerry Playbook can bring to the table to gauge if the iPad has a real competitor which can make my fiancée happy!