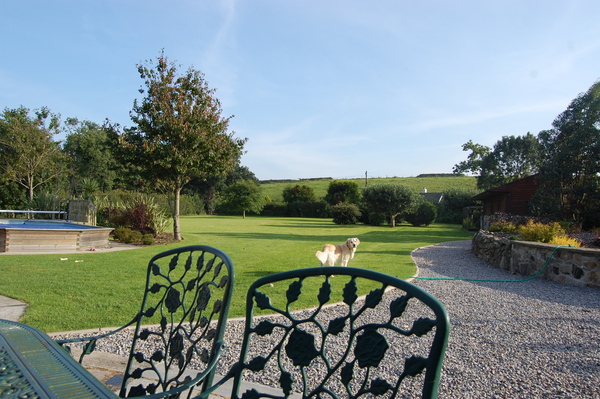 I started writing this post about a month ago whilst sat in the back garden of a friend's house. I wasn't actually thinking of much, but the environment allowed me to think clearly and freely. For reference, I was in the garden pictured above, and there wasn't just one of those gorgeous dogs, there were three!

Since that time I've been thinking more about workspaces, and I've come up with some golden rules for a good office for me. I must stress that this works for me, and may or may not work for you.

Rule 1: as few interruptions as possible

I had had a good afternoon in the garden, silent apart from the birds singing, and plenty of tea in the kitchen. I was getting a lot of good thinking done and I was starting to get it down on paper. My only problem was three lovely four-legged distractions. One of them wanted me to throw a stone every 5 minutes and would bark if I didn't. The further I threw it, the longer a break I got. If I threw it out of sight, she'd come back with a different stone after giving me nearly 15 minutes of uninterrupted peace as a reward for my good throw.

The more I think about my workspace, the more important a lack of interruptions becomes. A place where a person can think, exclusive of noise and distractions is conducive to creativity and great work. Someone speaking to you engages the language part of your brain (the left hemisphere). This generally dominant part stops the creative half of your brain (the right hemisphere) in its tracks and it can take a few minutes to re-engage this half your brain.

Now, in my opinion, coding is a creative task like drawing, and not a language or logical task. I've noticed this recently as I've been reading "Drawing with the right side of the brain" in an attempt to learn to draw. The book describes giving the language center of your brain a task it rejects in order to engage the right, more creative, hemisphere. As I've been doing this with drawing, I've noticed I do exactly the same thing when I'm engrossed in coding. The book recommends as few interruptions as possible when drawing, and so I recommend the same when working.

Rule 2: a clear desk is a clear mind

Once again, on the subject of distractions, having too much junk on your desk is conducive to procrastination, the enemy of getting things done. I personally tend to tidy, play with my iPad, sketch something, all generally whilst I'm waiting for something to load (I'll come to that later). This also relates to any application that sends you messages. I'm a sucker for having GTalk, DestroyTwitter and Outlook open on my laptop as well as the company messaging system. It's a blessing that most of my e-mail is mailing list stuff that I can ignore and that DT has an "away" function that queues up tweets for when I need a break or I'd get nothing done.

For instance, look at the picture above. This is me in 2007, not long after I'd started working at my current employer. I'm not following any of my rules here and I'm amazed that I got much done at all. The following things are wrong:

I've learned a lot since then and now my desk is a lot clearer with fewer distractions.

So, a new policy, my desk shall be clear and the only apps open shall be the ones that I am working with directly.

Rule 3: I must have a wall, it stores the ideas too big for my head

This one may seem odd, but I have to have a wall for me to put design work on. If I don't get some place for me to stick my database diagrams and wireframes, even if it's just the little partition between my desk and the next, I won't be able to see the big picture.

One of my jobs back in 2009 was up in Sheffield, where a team of four were trapped in a tiny glass box in the middle of a floor of people. Crampt conditions and general overheating weren't the best when all of us were in the room, but since we didn't have any desk space, we all used the walls and shared ideas. The result was a well thought-out system which was hugely well received by the client, all because we could see the big picture.

On other projects where I've not had access to a permanent wall, I've simply worked from home where I have a whiteboard (which I've had since uni). Giving myself the freedom to work in large spaces always produces my most creative and thought-out work.

Rule 4: equipment is just as important as space

Recently my desk and office have been brilliant, I'm following my rules and they're working. However, I'm falling into an old trap, doing something else whilst the system loads. Unfortunately for me, the system needs to take a 30 second break every time I move the cursor (no prizes for guessing what tech I'm using) and hence I'm taking 30 seconds out to do other stuff, like get distracted by twitter.

The rule here is that your equipment is important. If you're having to compromise and work around issues which allow you to lose concentration, be it a rubbish laptop or running out of sharpies, then you have to correct that. I'd never dream of doing iPhone development on my 2006 macbook, it's simply not fast enough and would annoy me more than the task would be worth. Get the most powerful computer you can afford, it will make your life so much easier in the long run.

This last rule is the hardest to achieve, but will do the most for your productivity. My team, my colleagues and with few exceptions my friends, are not only there to work with me, but to keep each other happy.

An example from a project in late 2009, this time 12 people crammed into a room for 10; desk space at a premium, we were all in the same boat, and we kept each other going. The team dynamic was good because we were all working on something that we knew was important to the client and we were happy to work all sorts of hours to make it work. We also had an assignment manager who bought chocolate and sweets by the boat-load whenever morale started to waiver. Lunch was taken together and trips to the pub were highly encouraged. We were happy, and so we worked hard.

It is important for your health, not just your productivity, that you're happy at work. Take breaks when you want, not when you're distracted by someone. Build up a relationship with your colleagues where you can talk about anything, not just about work all the time, and have some fun!

These are my rules that I've come up with for a more productive place of work. I'm not saying they're right, but they work for me.

What are your rules for a productive workspace? I'd love to hear your suggestions and advice. Just leave a comment below.