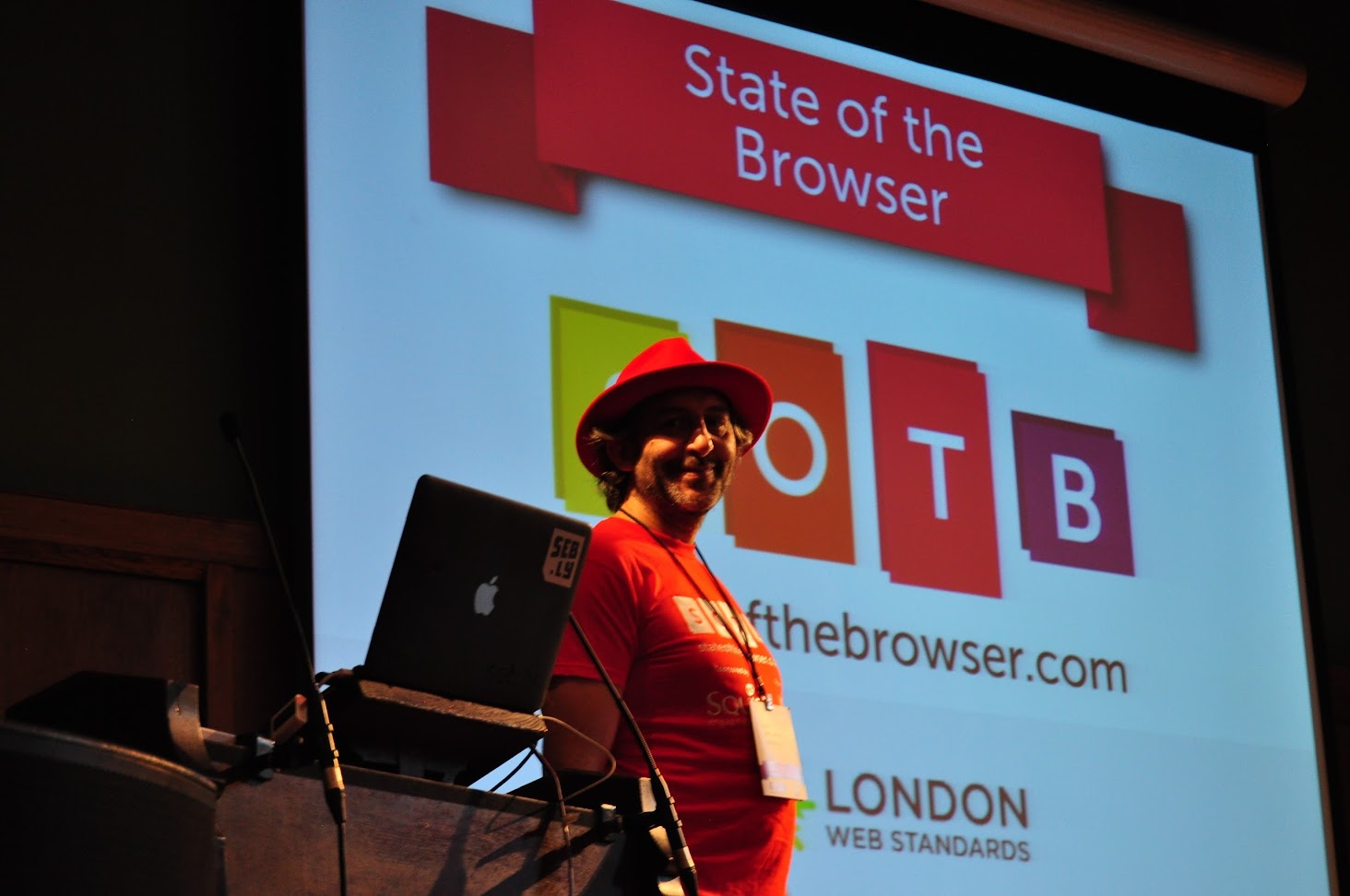 A short write up on the weekend

Another year, another State of The Browser – now in its fifth year, it’s a conference for the London Web development community. It’s aimed at the masses, we want it to be accessible to all and have really great speakers, and this year was no exception to those rules.

In its inception, SOTB was a chance for the browser manufacturers to get together and talk about the latest and greatest things in their browsers to a wide audience. A lot of this mandate is being done (very, very well) by Edge conference, organised by our friends at London Web Performance. So, this year, we went back to our roots, the community that LWS is built upon, for talks about the browser, new browsers, new technology, and new ways of working. I’m really pleased with how it worked out, and we had a really high quality of submissions (my fellow organiser Morena Fiore-Kirby covers this really well in her write-up) it’s a shame we couldn’t fit more in.

This also meant that we could feature more new speakers and I’m really happy that we did. LWS has a long history of being the place where great speakers have done their first gigs (Pete Gasston, Laura Kalbag, and apparently Jake Archibald did a talk in the very early days – to just name a few) and I hope this tradition will continue. We were very pleased to welcome Martin Jakl (@JaklMartin) and Laura Elizabeth (@laurium) to the stage, mentored by Pete and Solé, they both did a great job with their talks. They’ve both got bright futures so watch out for them.

I’m very happy to say that my surprise of the weekend was Chris Heilmann. Other than his incredible generosity in giving away 10 years worth of tech swag (see below) he gave the best talk that I’ve ever had the pleasure to hear him give. He seemed truly passionate about his new product, Edge, and the people that he works with to make the web better, fixing not just the web that you and I see, but also internal websites, massive SAP systems and changing web standards culture in huge corporations. If I hadn’t already been standing, I’d have stood up to applaud him and what the Edge development team have done. Thank you.

Thanks to everyone who came along and were such a friendly bunch of people. We got lots of great feedback, and I can’t wait to do it again next year!

Check out the photo gallery for the event on Google Photos
For more on the event, check out these articles:

p.s. The whole event was live-streamed, and we have videos of the whole event too – the first half is already up on the @webstandards Vimeo page with the rest to follow shortly. A massive thank you to our live events team Pete Wood and company who always do an amazing job. Thank you!

This month was a very special meetup for London Web Standards – it’s 5th birthday celebrations! Yes, it’s hard to believe that 5 years ago in October three guys met up in a North London pub to talk about the web. To celebrate this momentous occasion, Imogen Levy baked us a massive 7-layer London Web Standards Cake (British Bake-off contender next year 2013 for sure). Imogen, thank you so much (from all of the LWS Organisers)!

It was also a big LWS for me personally, as I took the stage to talk about a pet topic of mine: Less, Sass and CSS Pre-processors. Gotta say, I had a lot of fun and got some really great questions and comments from the audience. I’ll definitely do it again.

So, the sketchnotes service is at half capacity today, it being quite hard to do sketchnotes of my own talk. The notes this month are of Peter Gasston’s talk on The CSS of Tomorrow, covering future specs that will bring some of the features from Less/Sass to CSS, and hugely improve the way we layout websites (finally!).

Peter Gasston The CSS of Tomorrow

My Sketchnotes from Peter’s Talk

The CSS of Tomorrow – Peter Gasston

Thanks again to everyone involved, we truly celebrated LWS’s birthday in style.

September’s London Web Standards Meetup featured UX designers and developers bringing print to life with their tales of making web apps for the FT (Matt Andrews) and an iPad app for The Week (Harry Brignall). Sketchnotes are below.

Sorry it’s not much of a write-up (and a month late) but better late than never.

From Print to iPad – UX of The Week – Harry Brignall

This month’s London Web Standards was on augmented reality, a hot topic a few years ago that is making its way back into people’s mindshare with projects like Google Glass. We had Dr. Paul Coulton talking about the current state of AR on mobile, Imogen Levy talking about how Westminster Abbey is using 3D and AR to improve the visitor experience, and Trevor Ward talked about how we can use AR now on current-generation devices.

We were also graced with the presence of Clare Sutcliffe, who came to talk to us about Code Club, getting kids aged 9-11 to learn to program using Scratch. The video that she showed is after the gallery.

Dr. Paul Coulton on the state of augmented reality