Adobe has done the unthinkable, it's actually bought two companies worth giving a crap about. Nitobi, makers of PhoneGap, and TypeKit, pioneers of the CSS3 web-font game, have been acquired by Adobe.

Adobe should be thrilled.

It's now got two sets of highly skilled developers with great ideas and good products to work with. TypeKit is an obvious acquisition as it'll be part of Adobe's Creative Cloud offering that gives them the ability to use (and sample) a huge range of fonts across their apps.

Adobe have also promised that PhoneGap will remain open source, being donated to the Apache Software Foundation. This feels strange, as then Adobe just gets the developers at Nitobi themselves (who are obviously very good). This begs the question: why did Adobe bother with it?

PhoneGap Build takes the pain out of making PhoneGap apps for multiple platforms. If you've ever tried to do a build for iOS, Android and Blackberry, you know it's a world of pain and about 10GB of tools and frameworks. PhoneGap Build takes this all away from you, and is a service that Adobe can integrate into their Cloud offering.

All the cli tooling prototyped in Cordova now first class in phonegap/[ios|android]. Time to update Cordova.

I take this to mean that Cordova is back in focus, and Adobe will be actively looking to integrate it into DreamWeaver, in the same way it integrated jQuery Mobile.

We should be wary

Adobe's track record for mergers is not great. The Macromedia merger led to a focus on Flash and Photoshop, whereas other products like DreamWeaver and Fireworks were not given the time that they deserved. Lots of people lost their jobs in that merger too and I'd hate to see that happen to the guys at Nitobi or TypeKit.

We have to watch out for rising prices and being forced to buy products that we don't need. I can see it already: with PhoneGap integrating with DreamWeaver, the easiest way to build a PhoneGap app will be with that product or Build. Yesterday, those in the PhoneGap Build program were sent a pricing structure: 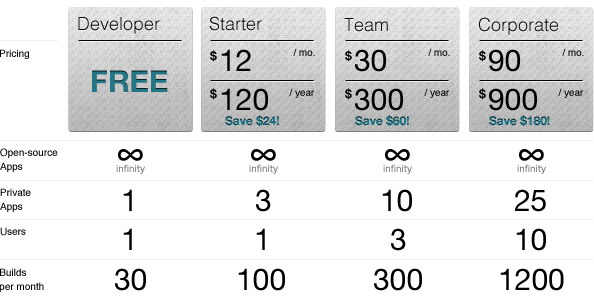 I can see these prices going up, and up (and they're not that cheap to begin with). One build a day with the free package probably isn't enough. I hope the same doesn't occur with TypeKit, or people will just move to one of the other services that exist (Fonts.com for example).

The other danger is that somewhere down the line, these products that many have come to rely upon will simply cease to exist. Merged so deep into Adobe's pipeline, the one thing that made them great, their independence, is stripped from them and the revolutions that they make simply slow down and stop. With the core of PhoneGap, we've been promised that they'll actually have more time for it and I hope this continues for as long as possible. What I'd hate to see is the core being neglected in favor of tools for products that I don't want to buy.

Fingers crossed that Adobe will really make something good this time, and that their commitment to the web and web standards continues, but I won't be holding my breath.