This second part was on the Future of Web Typography, presented by Richard Rutter (also of FontDeck) 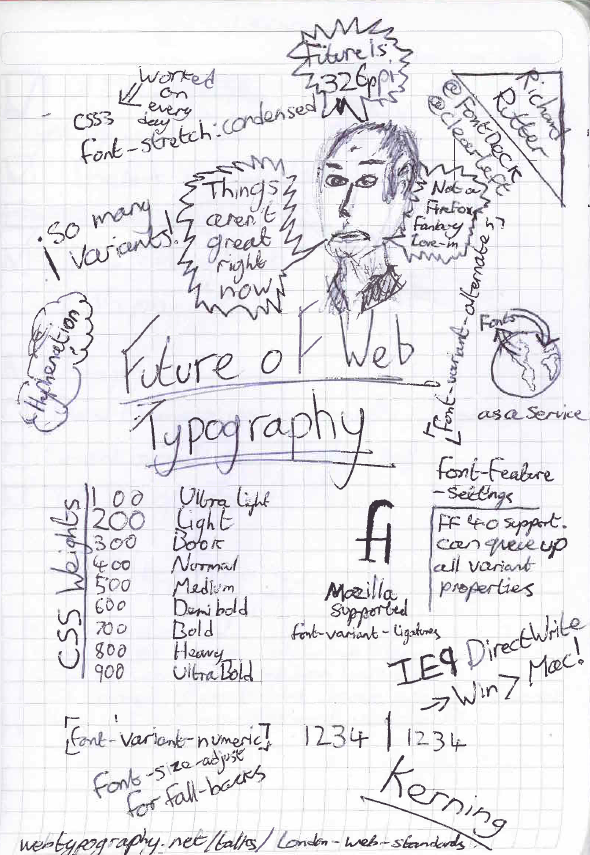 Richard is heavily into his typography. He recently launched FontDeck, a web fonts web service similar to TypeKit et al. Richard talked a lot about how bad things were before, how system fonts had reduced our creativity and what sort of deep opportunities for font producers lay in the CSS3 Fonts module.

Many of the features discussed (and sketched) aren't available in any build of a web browser, for instance kerning, numeric variants, ligatures, different types of ligatures, font stretch, named font weights, hyphenation and many other things. Firefox 4.0 is starting to implement many of these features but it's very slow going. A lot of time was spent pointing out what these things could do, and how they improved readability. He did also say that this "is not a Firefox fanboy love-in".

Near the end of the talk, Richard discussed a new anti-aliasing method from Microsoft called DirectWrite, a feature that uses a computer's GPU to render fonts on a sub-pixel level. He even went so far as to say that

"With DirectWrite, fonts will look better on IE9/Windows 7 than on a Mac"

He also made mention of the iPhone 4's retina display. The future is high-resolution displays, and with rendering technology that can actually support all of these rules which are built into fonts, the web will be a much nicer place to read content.

Richard made  a lot of the new way fonts were being served (as a service) being beneficial to both the client and to the foundry. It's cheaper for the client (not having to buy fonts at £500 a go) and the foundry also stops their fonts being pirated and distributed around the web.

Overall, Richard was quite downbeat about the state of things right now, but is confident they'll get better.

The full slides from this presentation will be available shortly (check back later).

Read the first part of this event, Andy Hume on The Progressive Web.