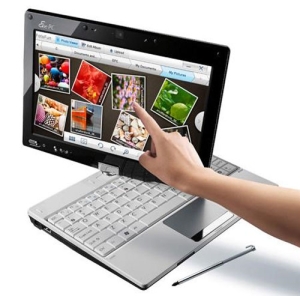 Last weekend I was sat on the tube (London underground to international readers), picadilly line to be exact, heading into central London. A young man got on and sat down opposite me. He got out a little ASUS netbook, turned it on and swivelled the lid to use it as a touch screen. "Awesome", I thought, "he's got one of those cool touch screen netbooks running Windows 7, I'd love one of those, it'd be so convenient".

I watched the man use the laptop for a while, tapping at the screen, using two fingers to scroll on a page and it looked ace; it looked simple. Soon, the experience turned sour.

I watched as the man pulled a stylus out from the side of the computer and starts to tap at the screen. I had thought styluses had been banned by international law since the introduction of the iPhone nearly two and a half years ago. Still, if there are some things that can't use the OS zoom function then maybe a stylus has to be used.

I then received an even greater shock.

I watched in amazement as the man lifted up the screen to try and use the keyboard. Upside down. A control + something command that was not present in the touch screen menu.

Naturally, as a usability practitioner, I was horrified but continued to watch the bloke struggle. It took five stabs and glances back at the screen to confirm the action was successful. By this time, the man looked thoroughly frustrated with his program's choice of shortcut. Soon after, he packed up his laptop and got off the train.

What appears to be the moral story, is that no matter how advance your OS is, the applications that you run can still scupper the experience, especially with tablets. There are two solutions to this problem:

1. The iPhone way - touch is the only interaction option. No legacy apps are allowed. It's an OS designed for touch and for touch only. 2. The full screen keyboard way - Windows 7 may have a good touch screen keyboard, but it isn't implemented in all apps (the iPhone way). You would need a true full-screen multi-touch keyboard, adaptable to different screen sizes, to make it function correctly.

Hopefully there's a third way, the Apple tablet way. We'll wait and see about that...