If you're like me, with an eye on Google Reader even over the holidays, you won't have failed to notice the upcoming Apple event at which the Apple touch-screen tablet, likely to be called iSlate or the Slate, will be announced. Such is the predictability of this event, given the number of rumours that have appeared, it is now completely without interest. Even the stock market takes more notice of Apple's rumours, rather than their product announcements.

So, I've gazed into my crystal ball, looked at the last few years of product announcements, and have come up with the major headlines for the next two years of Apple products. 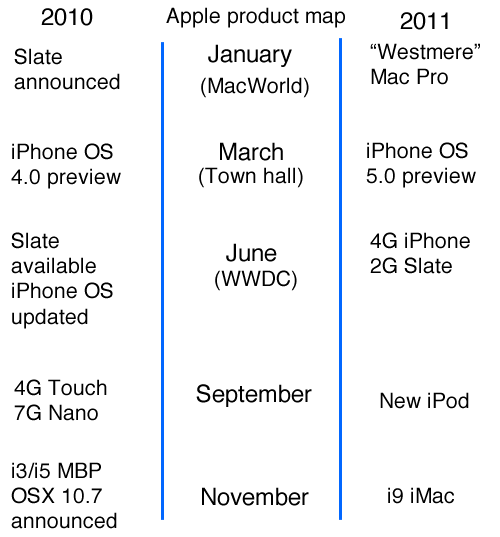 The major events, spread throughout the year, all have very specific themes. January is iLife/iWork and major product announcements, March is a developers preview of new software, WWDC in June is a major product launch, September is a big iPod event and November is pre-Christmas product refresh time. For those reasons, the above list shouldn't be too surprising to most people in the know.

I'm predicting next year will be the Slate's year, rather than the iPhone. It's too soon for a form factor change and it's got all the features it could have at this time, so 2011 will be the next iPhone update. The Slate will fit into the iPhone's product release schedule, now being Apple's flagship product, with yearly updates for the first few years depending on its success. The Macbook Pro line will be somewhat ignored until the end of 2010 when it gains Intel quad cores like its iMac brother. At this time, I believe the first details on OS X 10.7 will come out, probably with a new UI paradigm, potentially merging with the Slate's modified iPhone OS.

2011 will see "Westmere" Mac Pros, though it's possible that this will be quite a quiet event, given i7 iMacs are more cost-effective than Mac Pros. An updated iPhone/Slate OS will follow in March, and a second generation Slate in June (which will be the one I'll get). Some controversy to follow then with a new iPod on the horizon; my thinking goes that the whole product line there needs a kick to keep people buying them, and by this time, technology will be good enough for something amazing. Finally, after that will come Intel i9 iMacs, with those processors being available for Macbook Pros by the end of 2012.

Honestly, you could probably try and predict further ahead than that with some accuracy, but forecasts become quite hazy more than two years down the line. Still, if there's any betting shops out there willing to give me good accumulator odds on this, drop me a line!

Update 1 (March 2010): I got the Slate/iPad right, though not the release date. Still, by the time it reaches the rest of the world it probably will be July. Not so sure about a March "Town Hall" event, though I'd still expect iPhone OS 4.0 with the iPhone update this year. Also, people keep going on about potential Core i3/i5 updates for the Macbook Pro line. This hasn't happened yet and I still think I'm in with a shout of November. The problem will be power consumption and heat, which may need a bit more work to keep the 8 hour battery life promise that Apple have made.

Update 2 (April 2010): it seems I got the iPhone 4.0 OS announcement right at the town hall event, just seems that it was in April rather than March. Unfortunately, the i5/i7 Macbook Pro announcement was in April, not November as I said. Better luck next time for that one